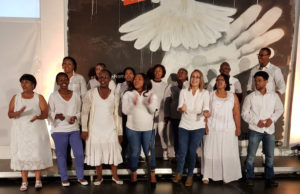 In 2016 the Aspen Pharmacare team in Port Elizabeth (PE), South Africa danced to “Break the Chain”, and, in standing true to our commitment, in December 2017 we sang in unity to show support for all the victims of abuse.

The Aspen PE Women’s Forum (AWF) collaborated with artist Nathan Sanan to implement a shock graffiti campaign depicting a crying women being strangled with the words “Don’t look away.” The edgy graffiti, completed after-hours, had the desired reaction with some concerned employees reporting vandalism and many other talking about the alarming image. The artist returned a week later to transform the shocking mural to one which reflected freedom from abuse and support.

Against this backdrop, symbolising hope and peace, employees gathered under the fairy lights at a special night time event on 7 December 2017. The programme included inspirational talks by Aspen’s Claire Chree, Rosetta Pokbaas and Mduduzi Sithole. Rosetta, an abuse survivor, encouraged all ladies not to stay silent and not to make excuses for abusive behaviour but rather to seek support. She recalled her experience as her biggest life lesson which did not break her but made her strong and courageous.

The highlight of the evening was listening to the touching performance of a special Aspen choir, led by the IT department’s charismatic Jeff Latham, singing our version of Rachel Platten’s “Stand by You”. The choir, recruited two weeks before the event, consisted of a group of passionate volunteers who managed to squeeze in time for rehearsals ahead of the event. Thank you to all who attended and joined in song and spirit in support of this earnest campaign aimed at instilling the message of no violence against women and children.