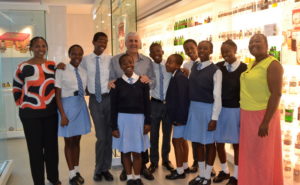 In April 2016 Stephen Saad did something that lies very close to his heart. He engaged with a group of local Durban-based young entrepreneurs who are all high school learners from disadvantaged backgrounds.

Their school, situated in an impoverished informal settlement in Durban’s Inanda township, produced two winning teams for a provincial young entrepreneur’s competition spearheaded by South Africa’s Small Enterprise Development Agency. While the one team focused on a social responsibility initiative to create a day-care for babies of teenage mothers, the other was a technological brainchild that, as far as ideas go, can surely rub shoulders with the best of international tech offerings.

Spending time around the boardroom table, Stephen took the learners down memory lane detailing the Group’s earliest days and he also relayed details of the deputy president of South Africa’s visit to Aspen’s Port Elizabeth manufacturing site earlier that day. The learners were overwhelmed when they realised that they are valued by Aspen as future leaders of our country.

Stephen Saad said, “It was extremely inspiring to see young people so engaged and so keen. Our key to our future is for our children to be able to dream big and then get the opportunity to live their dreams.”

The young entrepreneurs also participated in an interactive workshop on personal branding where they were guided to craft their ‘personal brand plan’ to better equip them for their roles as future leaders.

An Aspen representative served on the judging panel when the business plans submitted by eight learners were selected as finalists of the Students for Advancement of Global Entrepreneurship (SAGE) SA National Competition.