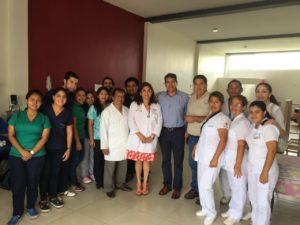 On 16 April 2016, a peaceful Saturday evening was interrupted by an earthquake that caused widespread damage across Ecuador’s Manabi province. With a magnitude of 7.8 on the Richter scale, this natural disaster was the worst in 60 years. It claimed the lives of 272 people and left 2572 injured residents in its wake, while thousands lost their homes resulting in immediate declaration of a state of emergency.

Together with local employees, Aspen’s General Director, Jorge Arellano took action to identify ways in which to provide assistance. With the help of Aspen Mexico’s leadership comprising Carlos Abelleyra, Alejandro Gayón and José María Perulles desperately needed donations of infant nutritional products were collected to alleviate the need of infants in the victim’s camps.

A delegation of employees headed to the affected Manabitan main cities of Manta and Portoviejo with 1,400 cans of Progress Gold, 900 cans of S-26 AR and 72 cans of S-26 PDF Gold infant formula.

“We visited the main public institutions and hospitals, certain private doctor’s practices and one of the biggest camps where a thousand victims were being accommodated. It was very traumatic and emotional to witness the devastation that this terrible catastrophe left. Seeing so many people suffering the death of loved ones and having to cope with the loss of their homes and possessions was heartbreaking”, said Daniela Muñoz

“It was however equally gratifying to be part of a team that witnessed the manner in which Aspen responded to this disaster and to experience the caring hearts of our people who unified and showed such deep support for the victims”.